To Jeju and two birthday celebration on the way! 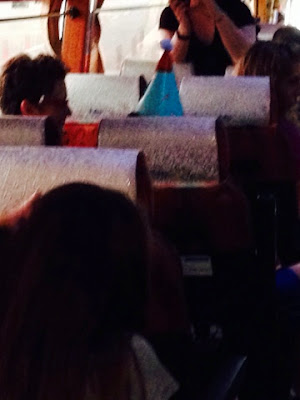 Today we made our second attempt to fly to Jeju Island and it was a success. Yay! Today was also Ben and Akimoto's birthday. We left the hotel at six AM in a bus up to Seoul for about six hours and then our flight to Jeju took around an hour to get there. After we arrived we went to a traditional Korean dinner where our table tried a little pepper and almost died from the spiciness. We then left for the Nanta show which is like an Asian Blue Man Group with food. Kate Khouri got married at the show (jjump t acting).  After that we went to our hotel and went to sleep. 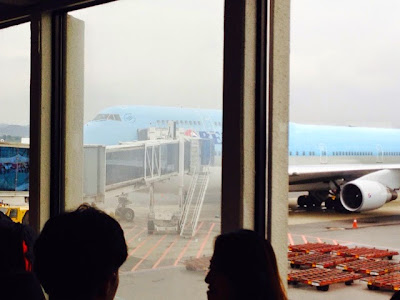 Today we (finally) left mainland Korea for Jeju Island, a self-governing province formed many years ago by a volcanic eruption. Being volcanic, the island is very mountainous, with only a thin layer of soil. Temperature and weather can also vary greatly between parts of Jeju that are relatively close to each other. This type of environment is well suited for tangerines, for which this area is famous. Other than that, the main buisnesses on the island are tourism and fishing.
We left from our hotel at 6:00 AM for a five-hour bus ride back to the Gimpo Airport. Akimoto and I received a birthday celebration during the drive, with brownie cookies, sweet buns, and little toy drums generously provided by members of our group. We also watched a Korean movie entitled "Scandal Makers" during the bus ride. While the bus ride was long, the airplane ride was very short. Our new tour guide, a nice man by the name of Chin, met us once we landed and proceeded to tell us three philosophical allegories regarding happiness, love, and friendship.
Some of our party left to help unpack our bells (for which we're very thankful) while the rest of us went to a very nice fish restaurant for dinner. Dinner was followed by a short bus ride to Jeju National College, where we saw a group called "Nanta" perform a piece called "Cookin'," which can best be described as a mix of the Blue Man Group, the Flying Karamazov Brothers, and Stomp, with some added Asian flair. It was a really amazing show. We then headed to the hotel and said goodbye to Chin, and acquainted ourselves with the interesting rooming arrangements (i.e. one bed in a room for four and the toilet directly in the shower). That's not to say the rooms are bad; they're actually quite pleasant and spacious, and there's even free Wi-Fi. Tomorrow marks the first day of symposium, so they'll be plenty more to say in upcoming posts.
-Benjamin
Posted by Unknown at 8:58 PM