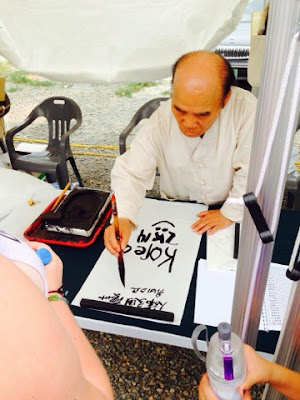 Today was one of the calm days, which was good because it gave us time to reflect on what we did yesterday at the DMZ. We started our day with a five hour bus ride, which only felt like two because we were having so much fun. I hope that I can speak for the whole group when I say that the bus ride really helped with us getting to know each other better and "bond". We took pictures with One Direction and we learned that the best way to sing songs from Frozen is out loud and together "but the most important thing is that we had fun." ~Isaac age 8. After we had fun on the bus we went to this really cool village and we got to do arts and crafts which were supposed to be done in Korean calligraphy but we kind of butchered it.  But we got laughs out of the villagers which is awesome. After that Sonja and I played this game where we had to get a rubber thing in an urn. Today was great!! 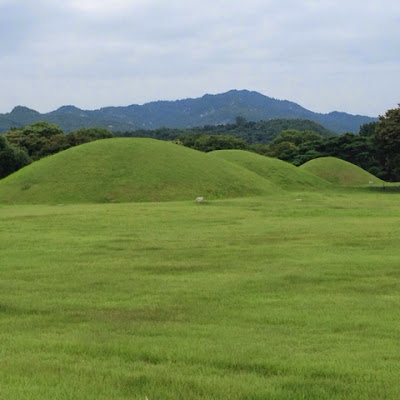 Today after visiting the village, we all headed back onto the bus, more importantly back into the air conditioning, for another hour long bus ride. This time we were headed for the ancient tombs. The tombs were the resting grounds of Korean royalty: kings, queens and families. As we first pulled up everyone looking out the windows was amazed by the size of the tombs. The ground rose into giant grass covered hills and there were dozens all around us. It was really amazing to see so many in one place. Some people at first thought they were just man made hills, as there is nothing on the outside but grass. We entered the tomb after our tour guide Christine had done some explaining. Inside the tomb were replicas of a king's resting place, as well as displays of artifacts and jewelry worn by royalty at the time. It was set up in the format of a museum, yet from the outside it looked like nothing but a massive hill which was really really cool. Korea is extremely rich in history, especially in contrast to the short history of the United States. As we continue through our trip and our many visits to palaces, museums, villages and more, it is becoming clear to all of us that the rich history of Korea is a vital part of its culture. Seeing the tombs today helped all of us to better understand the significance of Korean royalty in ancient times and how today their memorials are preserved. After we exited the tomb exhibit we continued walking. The tombs were everywhere, however only that one specific tomb had been fully excavated and opened to the public. The rest were left relatively untouched, in an attempt to preserve as much as possible. We finished walking through the area back to our bus, undoubtedly taking many pictures along the way. The pathway was surrounded by bamboo and beautiful trees which proved selfie- worthy. Overall the experience at the tomb was an amazing one, as we all got to experience the beauty of Korea while also learning about its history. 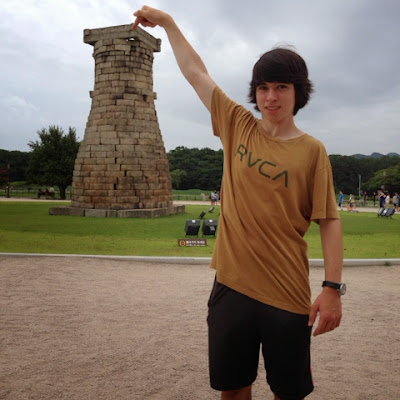 Today we were lucky enough to see the tombs of past Korean emperors and also the location of their old palace. We went on our tour bus to the tombs. I remember seeing huge bumps in the middle if the park. I was told that these unnatural hills were hollowed out and were used as tombs for the dead emperors of Korea. There were many of these hills that were covered with grass. However, only one tomb was open to the public. I remember that I saw a lot of the emperor's gold jewelry. This included earrings, necklaces, and bracelets. We were also lucky enough to see a replica of the real tomb that was used to house these Korean emperors. Soon after we visited the place in which they lived. On the down side, most of the buildings that were there were burned down. However, we looked at a 50 to 1 scale model of what the palace used to look like inside of one of the reconstructed buildings. There were three remodeled buildings that were put in to show what the original palace looked like. Because of this, most of the place was empty except that the foundations of the original building were marked and fenced in so no one could go inside. Each building was unique and looked out over a beautiful pond with many Koi fish inside. We all took many pictures of the pond and the buildings around it. I really wish we could have spent more time there. 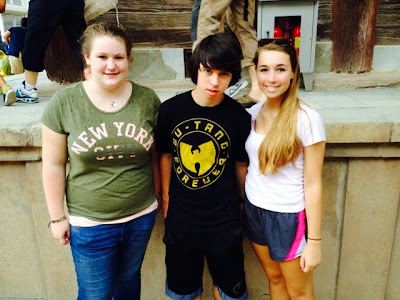