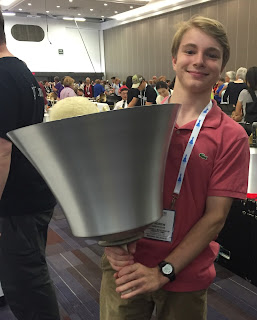 Thursday was a spectacular day. In the morning I went to la petite crêpe, as did EVERYONE else.  After this was a massed rehearsal where we could now see progress in our music which is an amazing feeling. Then there was the workshop where I got to roam the marketplace, and ring the G1! Everyone there was nice!  We weren't rubbish this time. Following this was lunch, and then a mini concert!, and ANOTHER rehearsal. Then another concert.

Both of the mini concerts had really interesting music played by both choirs and individual ringers. After this, I, along with others got to play Russian music! the music we played was both historic, and fun to play. After this was the West Coast Aboriginal Experience at the Hyatt Regency hotel. The had lots of different food to eat, and it was all great. Then there was vocal music, some of which I might want to transpose for bells.