>Saturday, July 31
Okayama Castle and the town of Kurashiki
After we enjoyed our gourmet salad and bread for breakfast, we headed out at 8:30 am to catch our first train of the day. We had a quick Bullet Train ride to Okayama, then grabbed some taxis and headed to Okayama Castle. We had one little incident where we had to call back a cab to get Stephanie's camera, and to no surprise, it was promptly handed back in one piece. To get to the 400+ year old castle, we mazed through giant rocks that made a huge rock wall. It was pretty cool to imagine how they managed to put together such an amazing piece of work. The castle was through an "unopened" gate and up on a hill. It looked like a traditional Japanese castle, but painted all black. It was very pretty. We were able to go inside of the castle and look around because it was a museum inside. There were many interesting artifacts to look at, but most of the descriptions were unfortunately in Japanese. We got a special treat from two of our bell ringers, Grace and Adam. These two were nominated to dress up in a Kimono, a traditional Japanese outfit, and we were able to get a real sense of what it is like to "feel" Japanese. After a few laughs, we headed back to the train station and went to Kurashiki.
We then went to an older town that was the Japanese equivalent to colonial Williamsburg in Virginia. The area was divided into two sides by a creek in the center, separating the various stores they had to offer. The afternoon was spent shopping but mainly ducking into areas that had air conditioning -- it was a very hot day!
It was an early night in for us as we returned home around 5pm, so that we could get some much-needed rest or do laundry, which for some couldn't have come too soon. Some of us went to a traditional Japanese style restaurant for dinner and it turned into a really fun night. It was insisted that a variety of foods were ordered so that we could all try new things, and it was a good thing we did! Ashley and David now have a taste for shishamo, or tiny fish that the rest of us bell ringers were reluctant to try. It was great meal followed by a quiet night back in our hotel rooms -- that is it was quiet when we were told to go back to our own rooms! 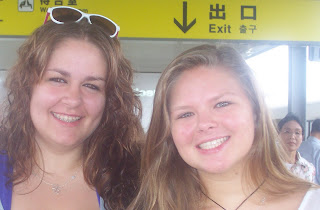 Chelsea and Stephanie
Posted by Eiko at 9:59 AM