Hey, it's Jessie! Today has been the coolest day, so far, in my opinion. We woke up and had breakfast at the hostel. In case you were wondering, yes, Grace, Sandra, Kimberly, Erica, Rachel, Kristen, Allison, Kate and Ashley got up to the top of their mountain. They got up at 6 AM to do it. I would have gone with them, but I was up until 1 am watching the opening ceremonies of the London 2012 Olympics, which was awesome, but I'll talk about that some other time. The walk down the hill wasn't any where near as bad as the walk up. We put our overnight bags on the bus and then walked down the street to the Snowdon train station. From there, we took the steam train up  to the peak which was at 3560 feet (1085 meters) the highest in all of Wales. The train ride was an hour long but it was worth it because the views were INCREDIBLE. I LOVE fantasy movies and these mountains looked just like something out of Lord of the Rings or a story about the Arthurian legends. We took a bunch of pictures but it's just so much more impressive and indescribable in person.

When you get off the train, you walk through the visitors center which has a panoramic view looking down the side of the mountain ( PIC if we have one). Walk outside and up two sets of stairs and you're at the summit. It's a pretty small area and it has one of those compasses that tells you how far it is to other places. On a clear day you can see out all over the mountains. Unfortunately, it was cloudy and all we could see was white. Plus, it was really windy and cold-but it was still fun. We were about to go back inside the visitors center when it cleared up a bit and we could see. It was one of the coolest sights I'll ever see, as well as probably the highest point in the world that I'll ever go to. We were only allowed 30 minutes at the summit, so we got back on the train. The train was cramped, but still really cool. Wow, I  gotta come up with a new word to describe stuff with besides cool. Anyway, the train looked just like English trains you see in 1940's movies.

We left Snowdon and drove half an hour to a small town which I don't know the name of.  (Betws-y-coed) We had lunch and looked around a bit. Now we're driving another hour to Chester. 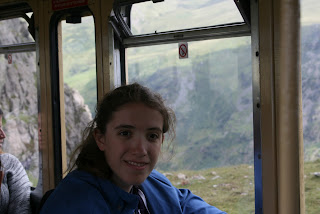