Today we had the earliest morning of them all so far, at 6 am for most of us. Dragging our luggage on to the tour bus, we left the hotel in Ireland for the last time. Finally, we were our way to the ferry for our joyful trip to Wales. It took close to an hour to board the ferry.  While we waited, we ate our bagged breakfast full of delicious surprises....and jam. The coach bus drove onto the ferry and is still with us throughout our trip through the United Kingdom.  Some slept, some played cards, and some played farckle ( a new dice game brought by Grace from her generous grandmother). While we were on the ferry, Kristen got a lion balloon, which soon latter popped. (She blamed Seamus, our driver, that we love and adore.) We spent a good three hours ridding along the Irish Sea on the magnificent Stella (our name for the ferry). After reaching Wales, we boarded the coach once more for our trip to Caernarfon (the beautiful town that housed the castle that we would be touring that afternoon).  The landscape on our way to the tour was full of sheeeeeeeeppp (weeppies) and had beautiful views, too. Finally, when we had arrived at our destination, we were able to get lunch and do some shopping. Most people got traditional Welsh food, others got KFC-which is obviously more traditional then cafe's. When everyone had finished their shopping sprees, it was time for the tour of the castle. The group watched a fantastic video, that did not put half of us to sleep, and was not cheesy Sarcasm. The rest of the castle was a self tour, so exploring every inch of the corridors and towers was an invigorating experience! We then had more free time to run around the town and look at all the cute things about the town. There was a fountain with children playing in front of it with a ice cream shop along side that made a great day even better.  After finishing our shopping and group pictures in the castle grounds, it was time to board the bus and make our way to the hostel. Our place to rest our heads that day was a quarter of the way  up a mountain in Snowdon, Northern Wales. The bus could not go up the mountain, so we had to walk up....luggage and all. After the best walk of our lives (hahah), we dropped our stuff off for the night and went out to explore.  Kim, Sandra and I found a stream and dipped our feet in. Sweet Lord, it was soooooo cold. We Started to walk around and met up with some others in the group and decided that we should try to walk up the mountain. It was almost successful until we had to walk past a house where a man was standing. We all got a little nervous (Ashley) and turned around and then went to dinner (which was provided by the workers at the YHA hostel-soup and chicken. Since it was my birthday, we got cake and cupcakes and apple crisp for dessert. After dinner, we tried one more time to get up the mountain. The sites on the way up the mountain were positively beautiful. I can't even stress how amazing it was. We were close to 100 yards away from the summit when one of the adults asked if we could come down because it was going to get dark (it didn't set for another hour and half, after all, we are in Wales). So we, regretfully, went down the mountain. Sandra, Kim and I once gain went on an adventure as Ashley was taking pictures of the lambies. We made a friend with a girl named Safire from Liverpool and walked around for awhile, when we realized that we should climb the mountain in the morning. So, we went back and told everyone what we were doing and went to bed.  It was probably the best birthday ever! 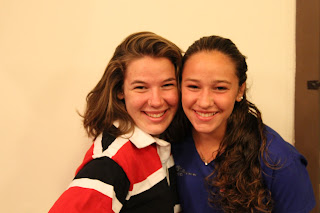