Sunday, July 25
So now we have a sheet cake(alot of time versus a sliver of time)worth of time...this morning we got up at 7 o clock. It was a rough morning but we got to spend some time at the beach. It was nice even though we didn't get to swim. Then we had morning service with the Kanto Gakuin choir group. The service was in Japanese and for the most part we couldn't understand a word but it was about the meaning of the symposium theme, Echoes For Peace. After the service we went to breakfast, and we had salad, French fries, sausage, eggs with cheese and ketchup, and really interesting apple juice with a straw. Then there was the toast. This toast according to Chelsea was the best toast she has ever had In her life...literally (no joke). We then had a short break for 15 minutes. We got settled and unpacked during that time.
So then we had a two hour practice for just our choir. The last half hour of the practice the Kanto Gakuin choir joined us to play. Then we went to lunch. We had rice and beef curry, salad and water melon (which Chelsea also liked way too much). After lunch we had introductions with all of the choirs and the alumni, which was insanely confusing. And right now we are writing the blog in the lobby of this place while Kim is trying to give us ideas but failing. So then we had more practice before playing UNO with the kids from the Kanto Gakuin group. During the UNO game we were each paired up with a person from the Kanto Gakuin group. Chelsea and Kim won right before we had to go to dinner. Chelsea's new favorite food was the odd apples we had. At dinner we had egg drop soup with corn, sticky rice, beef and special apples, large shrimp with zucchini, and then for desert we had an orange custard. Grace taught Jun and one of the other girls from the Kanto Gakuin choir how to play three bells in one hand. Then they taught all of us how to play "with our knees" or dancing while playing. Some people went to the beach really quickly before another solo practice. We practiced our solo piece before heading off to finish this blog in the lobby where Kim still fails to give us ideas.
Grace and Adam 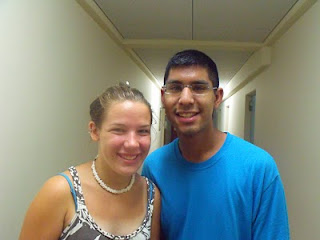 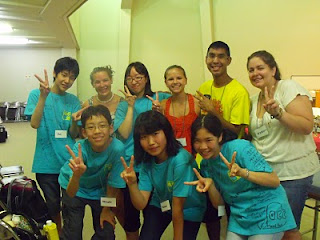