Climbing the hills in Wales

Today, I woke up at 5:50 am, put my jacket on, and went to the downstairs floor of the Hostel. We had to be extra quiet so as not to wake anyone else up. After we did a head count to know who all was going with us, we started hiking. We went through a campsite and past a pasture where one of the sheep, "baa'd" at us. We went over a ladder, following the little river thing up the mountain. When we reached about the halfway point, we took a break right before the third ladder. Grace was talking about how when we go over this ladder we have to hurry so that we don't anger a certain ram. We ran up the mountain a little to get out of said ram's territory, and when we turned around and looked at all that was below us, it felt like (to me)we had won the Olympics! (Consequently, most of us watched the opening  the night before). It got steeper and steeper as we went higher and higher. It also got colder and harder to breathe because of the altitude. By the end, everyone's shoes were completely soaked. We made it to the top and took lots of photos. We couldn't sit down because if we had, our muscles would have locked and tensed and that would have been bad. We looked down and saw what we accomplished and (to me) it felt like I had conquered the world! We worked our way back to the Hostel.  As we were walking down, I looked and saw the sun illuminating some of the other mountains. It was breathtaking. We then had breakfast and put our shoes in the drying room to dry. After breakfast, Ashley held a toast for *"Team Ram" who trekked to the top of **"Mount Sheep!" Then, we walked down a hill to the bus and rode to the train station. We took a train to the top of Mount Snowdon and my mother and I (and some other people) walked about 30 or 40 meters to the very top. It was in a cloud so the people who went all the way up went not a cloud, but the fact that it was a cloud also meant that it was very cold. We went in, got some food, rode down the mountain, and headed off to our hotel in Chester where we were staying that night.

* Team Ram: Me (Rachel), Ashley, Grace, Sandra, Erika, Kristen, Kim, Allison, and Kate.
** Mount Sheep is what we called the mountain. It wasn't the real name. 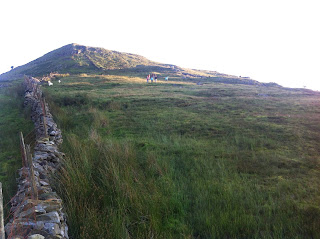